Ukrainians are not yet disappointed with the choice of the president and MPs. But some of the government’s actions no longer excite the majority

November 20 marked half a year since Volodymyr Zelenskiy was officially inaugurated as President of Ukraine with a speech in parliament. November 29 marked three months since the 9th Verkhovna Rada embarked on its powers.

“I would say that the honeymoon of those in power and the voters is over, but they are still in a candy period. It’s relatively sweet when people are still positive about the newly-elected authorities, especially President Zelenskiy,” says Iryna Bekeshkina, director of the Democratic Initiatives Foundation.

This quote is from the presentation of the new public opinion poll where sociologists focused on the voters’ assessment of the first steps of the new government. The November poll by the Democratic Initiatives and the Kyiv International Institute of Sociology (KIIS) provides data for comparison of popular sentiments in late fall with those recorded immediately after the elections this summer.

The first numbers from sociologists confirm Bekeshkina’s words. 36% of Ukrainians believed in November that developments in Ukraine were generally moving in the right direction and 39% had the opposite view. This means that the president and his team failed to keep a large part of optimists positive over three months of fall. At the end of summer, 50% believed that developments in Ukraine were going in the right direction and 25% held the opposite opinion. 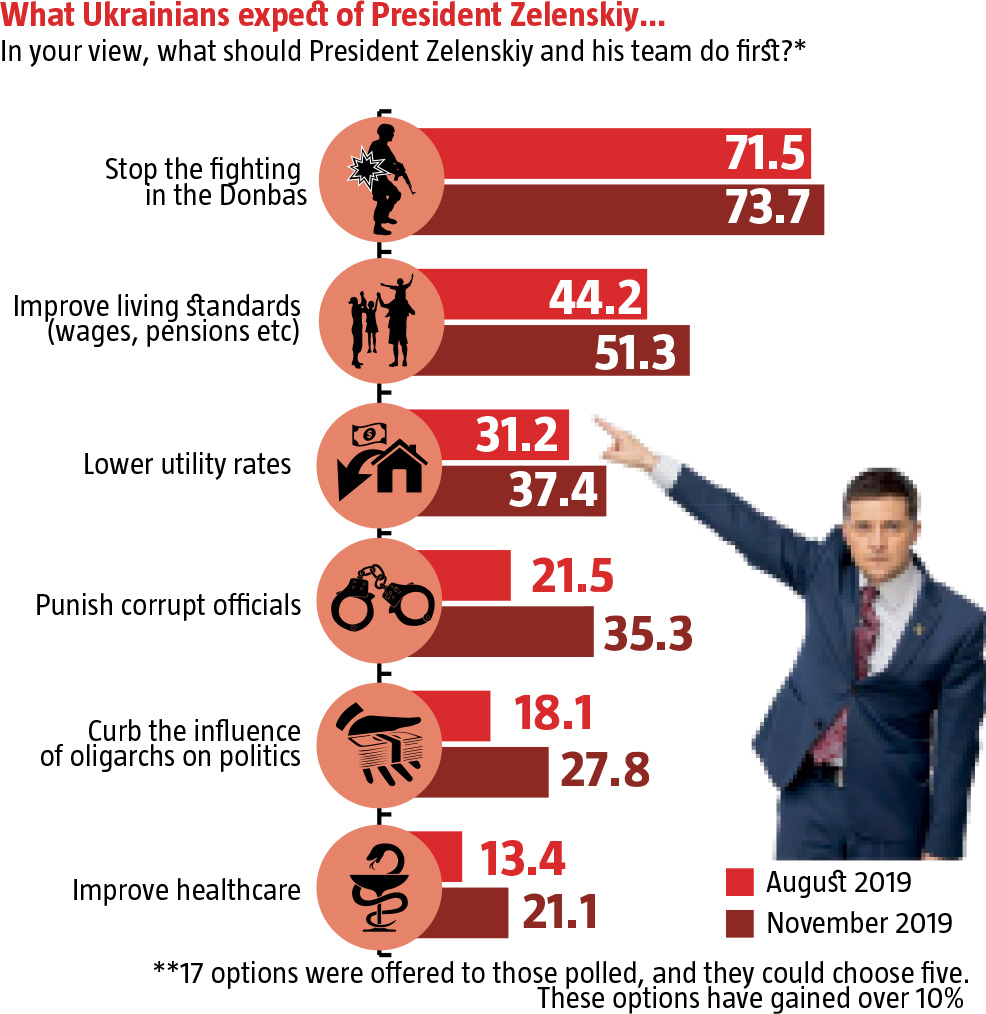 Still, the new government could have lost much more. Viktor Yushchenko, Ukraine’s third president, offers a good example. Nobody could have dreamt of having 50% of the citizens approving of the developments in the past 15 years. The previous record at 47% was in March 2005, measured by the Democratic Initiatives, when Yushchenko was making his first steps in office. Six month later, his approval rate tumbled to 16%. When Petro Poroshenko’s term in office was coming to an end in August 2018, 11% of those polled approved of developments in the country.

Scandals and communication failures have hit Volodymyr Zelenskiy and his team, but not fatally. For Viktor Yushchenko, the key reason for his plummeting approval rate was a serious political rival in his camp. The last straw was the dismissal of Yulia Tymoshenko’s Government after half a year in power. Volodymyr Zelenskiy does not have any competitors of this scale.

President Zelenskiy could grow even more reassured by the numbers from the citizens who still believe that their choice in the presidential race was correct: this indicator has improved slightly to over 69% lately. According to the pollsters, this indicator is generally equal for all candidates. The share of people disappointed with their choice of candidate in the first and the second rounds has increased somewhat from 1.5% to 6.7%. But these are mostly people who struggled to make a definitive choice back then. So they have not been convinced supporters of any candidate from day one. 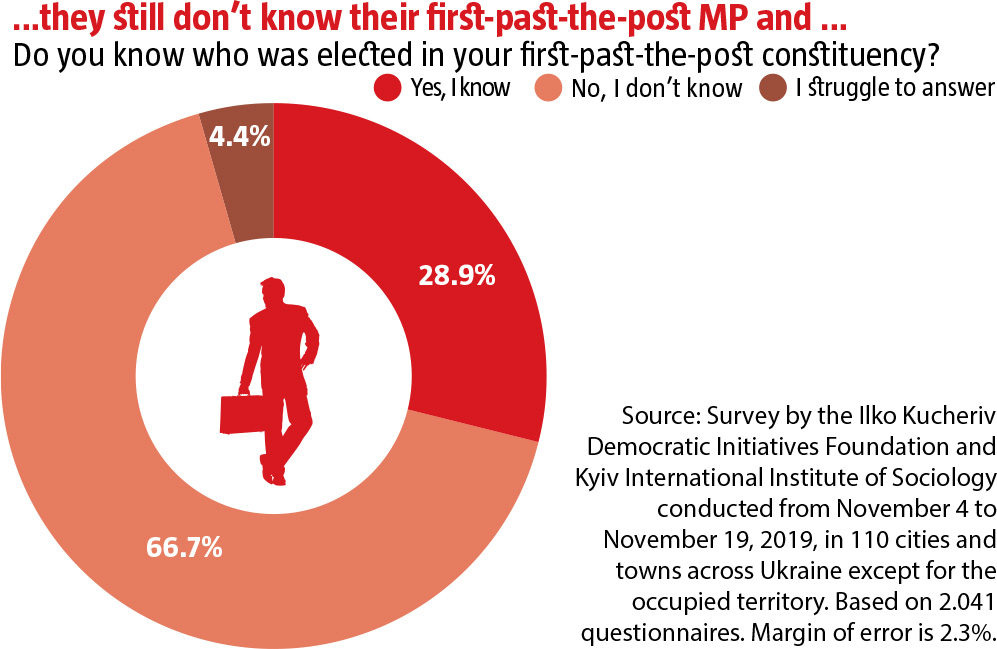 Similarly, the share of those who are mostly positive about the first steps from the president and his team has hardly changed since August – from 62.8% then to 62% now. At the same time, the number of people with a negative perception of the government’s decisions has doubled from 13% in August to 23.9% now. This is too the dynamics for those who did not have a clear preference during the elections.

But other numbers show a potentially serious problem for Zelenskiy and his team. Presidents and parliaments change while expectations of voters on what the government should do remain unchanged. The key desire of most Ukrainians (73.7%) is stopping the fighting in the Donbas. This is followed by 51.3% for an increase of wages and pensions, 37.4% for cutting utility rates, 35.3% for punishing corrupt officials and 27.8% for curbing the influence of oligarchs on politics. Social appetite for these four steps has increased by half since summer. At the same time, just 4% of the citizens expect the “people power”, a key message of Zelenskiy as presidential candidate. 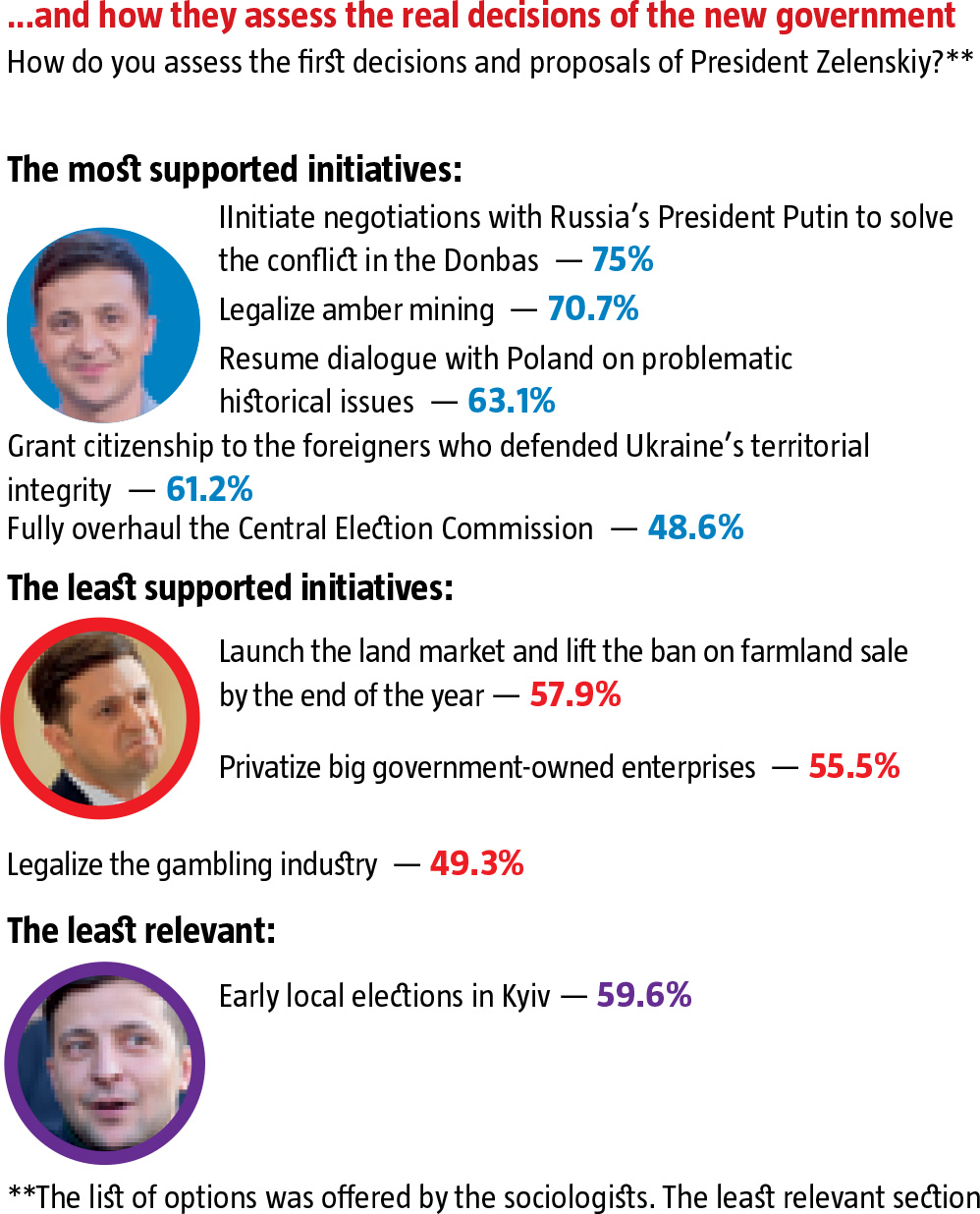 When it comes to the president’s first real moves, almost all of his liberal economic initiatives are unpopular. Leading the list are two decisions: lifting the ban on farmland sale with almost 24% supporting it and almost 58% opposing it, and possible privatization of big enterprises with 22.5% in favor versus 55.5% against. The initiative to legalize the gambling industry has found equally little support with 37.6% supporting it and 49.3% opposing it. The proposal to legalize amber mining is the only exception as over 70% support it. The new government’s economic reforms, while often seen positively in the West and among activists, should deliver a very quick effect that most of the population will visibly benefit from. Unless this happens, Zelenskiy’s rating will end up being hostage to the impossible dream of the majority about lower utility fees. 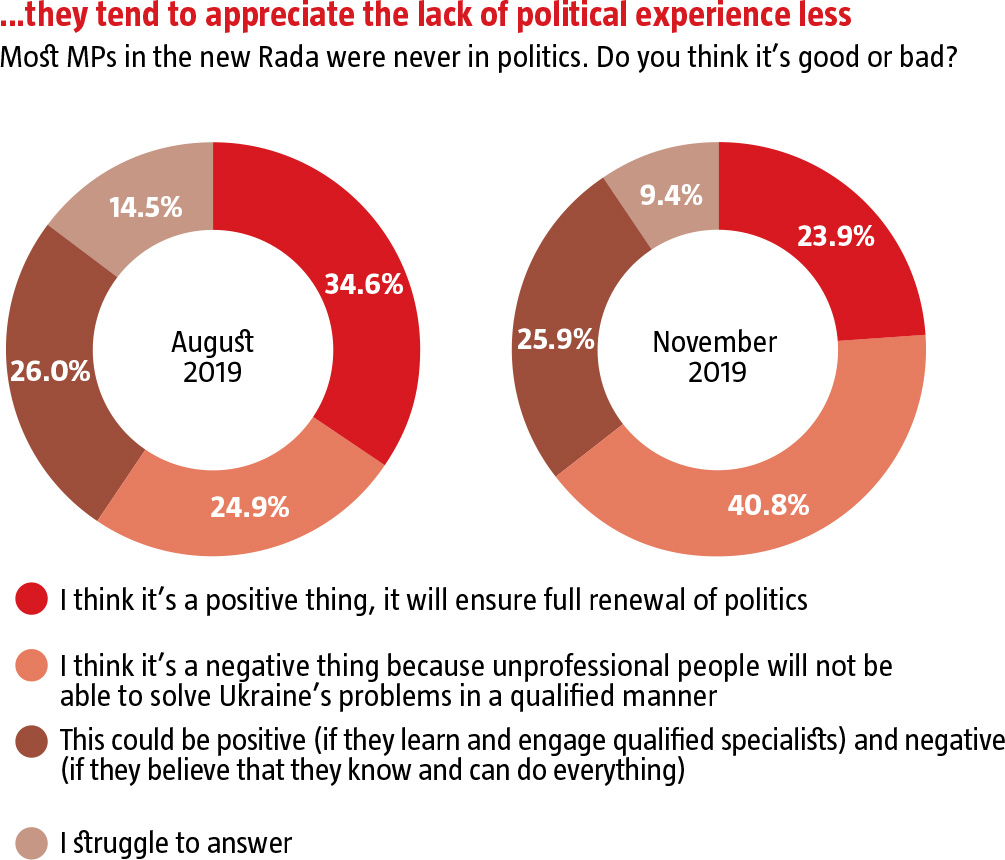 Moves towards a solution in the Donbas are now saving the government’s popularity. Despite the concerns of the proactive part of the population, 59% view the withdrawal of troops as a positive thing, and 75% support Zelenskiy’s initiative to start negotiations with Russia’s President Vladimir Putin to solve the conflict in the Donbas. However, these figures carry their risks. According to Bekeshkina, Ukrainian citizens are not very positive when it comes to specific concessions to Russia even if they generally want peace and welcome talks with Putin. A survey about possible compromises to end the war that the Democratic Initiatives plan to present in the near future confirms this. In December 2018, none of the compromises currently discussed – from the lifting of the blockade to a special status for the occupied territory – has the support of at least a third of all respondents.

The newly elected MPs already fare worse than the president. While 82% are convinced that their choice in the parliamentary election was correct, 47% are unhappy with how the current Rada works. Among the Servant of the People supporters, 51% are unhappy and 30% are happy.

There is no uniformity in assessments of the monomajority in the Rada. Nearly 40% of the citizens support it and an equal number opposes having a monoparty majority in parliament. Even the voters of the party in power vary in how they assess their preferred party: just 59% of the Servant of the People supporters are in favor of its monoparty majority. The main surprise of the recent survey is the change in public attitude towards inexperienced politicians. In August, 35% were positive about the lack of political experience, 25% were negative about it, and 26% thought that this fact alone does not mean much. In November, the figures were 24% and 41% respectively, and 26% still believed that this fact alone does not matter. Unsurprisingly, the Opposition Platform – For Life voters are the most sceptical about the lack of political experience at 68%, and those of the European Solidarity at 73%. Among the Servant of the People voters, 36% think this is a positive thing while 25% believe it to be negative.

A steep change in the way many people perceive “politicians from the street” was triggered by the scandals with a number of MPs and government officials. Most of the notorious MPs were elected through first-past-the-post constituencies. But the November poll revealed that only 29% of those polled know the name of the MP elected in their constituency. Among the voters of the Servant of the People which gained total victory in the elections, 37% don’t know their representative. The figures for the Opposition Platform – For Life and European Solidarity are similar.

It is thus unsurprising that 48.6% of the voters supports total restaffing of the Central Election Commission even though a record-breaking 83% approved the 2019 elections as free and fair. The key demand of the voters in 2019 was to punish “the old politicians” for unfulfilled promises at any price. In one way or another, this demand covered all spheres of public governance and was implemented through the elections. It is now time to look at “the new politicians” closer.

Man sets himself on fire outside Ukrainian president’s office

US official who certified Ukraine aid resigns at Trump's request